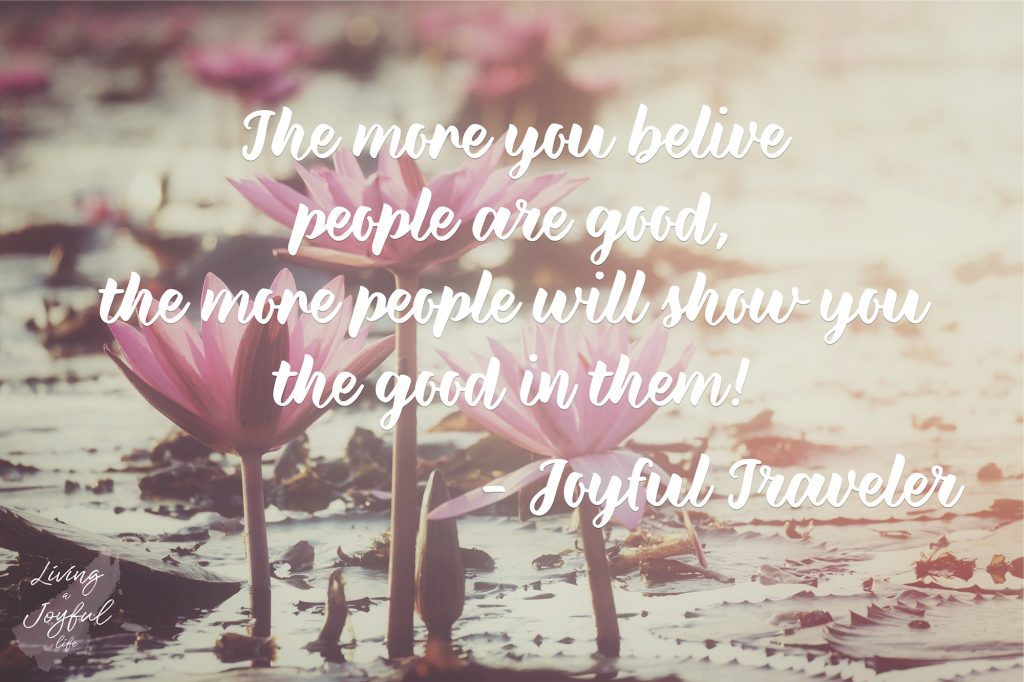 The more you believe that people are good, the more people will show you the good in them!

Today I had a very beautiful realization. I actually wanted to write that I had the most beautiful one, but I stopped when I realized that this is how I feel very ofter… that I had one of the most beautiful realizations yet. And this is making me very happy because it means that I am living life being aware of what is happening for me and that somehow everything seems to be beautiful for me and to bring me joy. It is so beautiful to have my joy come from within, from who I am and from what I learn every day about me and about Life and the Universe. As my dear friend Andreea usually says: “this is the best sandwich in the world (right now)” because for sure I am not eating a better one now :). And it’s the same with my realization, from what I remember now when I write this in order for me to decide, this is one of the most beautiful ones, at least today. 🙂

Back to the actual realization now. 🙂 I am not a morning person. I never was and for me waking up in the morning during high school was the nightmare of my life (I had to get up at 6 am because the classes used to start at 7 am). It is one of the main reasons I decided I want to be my own boss, so that I can make my own schedule. I normally wake up at 9:30 or 10:00 am, but today I had to be at 9 am in a place which was on the other side of the city. Whoever knows Bucharest knows that this meant (at best) at least 1 hour in traffic, so you can imagine how easy it was for me to wake up at kind of the same hour as in high school. 🙂
More than that, I didn’t agree to the appointment being at that hour, the girl who’s car mirror I hit two weeks ago just made the appointment without consulting with me. That happened when I had just integrated the integrity lesson and I needed to prove to myself that I can also live it fully (happily for me, since then I have let go of the need to prove to myself and others that I have learned my lessons). So I hit the mirror of a parked car, so that the decision of whether to go on like nothing happened (my mirror was perfectly fine) or to stop and leave my phone number on a note was totally mine. Considering all this and the unpleasant experience I have caused for this woman, I decided to take responsibility and just go with her decision regarding the time and place of the appointment so that I won’t cause another inconvenience for her (even if for me they couldn’t have been worse!). I hope the guilt is quite obvious here. 🙂

Even though it was not easy for me to wake up at that hour, as soon as I got out of bed I felt great and I used all my time in the car to listen to music and a great Tony Robbins program – Creating lasting change, a program that helps me grow. As soon as I was in the car I knew I was going to be late as I left my house very late, but I didn’t allow for this to stress me and ruin my mood. I realized that because I was unhappy with the time and place I sabotaged myself so that I also have a say in it. This is definitely something I need to work on. 🙂
So I got to the insurance company full of energy (and a bit of guilt for being late) only to find out she’s not there :). The agent told me that she left home the insurance form I have written with her at the time of the accident, and had to go back. He also told me not to worry about being late because the appointment was between 9 am and 11 am (which she failed to mention). That was a time when I was happy that I always look at the other persons point of view and I understood she had to be at the office as soon as possible, because if not I would have been very angry. 🙂

So I started working on the forms and I went to the car to get my insurance. When I reach my car, a gentleman comes to me asking if I’m the women with the Mercedes who hit his daughter’s car. 🙂 I said yes and he started apologizing for her being late and thank me for stopping and taking responsibility, because the same thing happened to her two weeks ago and the other driver didn’t stop. 🙁
He remained outside to wait for her and I went in to finish writing the form. Talking to the agent while writing, I realized he’s very nice to me and he told me what I can do in the future so that I won’t have to come to the insurance company for this kind of things and more than that, what I should do about finding my car scratched in a parking lot. He told me where is best to go so that I can fix things fast and easy considering all the details. I think he was the nicest insurance agent I ever interacted with.

When the lady finally arrived, we started working on the forms together and her dad started talking to the agent. I couldn’t help myself from noticing how different they interacted to each other than when they interacted with me. The dad was blaming the agent for the not giving them the opportunity to make the appointment faster and had a really nasty attitude, and the agent was explaining to him why it took so long and that it was their choice to choose that place at a later time (and he was right), but his attitude was one of superiority, like he was talking to a stupid person. In that moment it was clearer than ever for me what a difference your attitude to other people and what you expect to see in them (if you expect to see kindness or meanness) can make. Every time one of them was talking to me, their attitude changed immediately. It was very fascinating to see that. So I finished the forms and left meditating on what I have just realized. I still couldn’t believe how different they approached me and how they interracted with each other. And then I truly felt something I knew in theory: the people around us are our mirrors. You can’t provoke in someone something that it’s not inside you. Even if it exists in him, it won’t activate in the interaction he has with you. If there is no meanness and contempt inside you, you can’t evoke them in someone who has them, because you don’t resonate at the same frequency.

Because I left home extremely early and was late, I didn’t have the time to eat, so my next stop was to buy something to eat. There was a shopping mall nearby, but I only went there once or twice and didn’t know where the entrance to the parking lot was. So I stopped and asked a taxi driver who was parked. I couldn’t believe how nice he was and how he explained everything to me. I didn’t have a better interaction before with a taxi driver in 12 years of living in Bucharest. So I started paying attention to every human interaction I had. Without exception, everyone was very kind to me (as was I), including the cashier from the pastry shop where I stopped to buy something, who was just being mean to her colleague.

I enjoyed every moment when this was becoming clearer and clearer to me: if you are kind to people and expect them to be kind too, they will be. If you expect people to wrong you and despise or disregard you (as the dad in my story had), that’s exactly what will happen. Because, regardless of how people usually are, your energy and your vibration are the ones which attract people and experiences with the same vibration. You can have an interaction with someone who is normally mean, but who can be very nice with you if your vibration is higher and doesn’t allow that. Because you only activate in him the high vibration energy that is inside you.

So let’s try to live as often as possible on a high vibration and to keep in mind that everything that bothers me at the person in front of me exists in me too at a certain level. Maybe not in the same life aspect, but it is definitely manifesting somewhere in my life. It’s only up to me to see where and to change the thing that I don’t like about my behavior, so that not only I will be a better person, but I won’t attract that kind of behavior in my life. 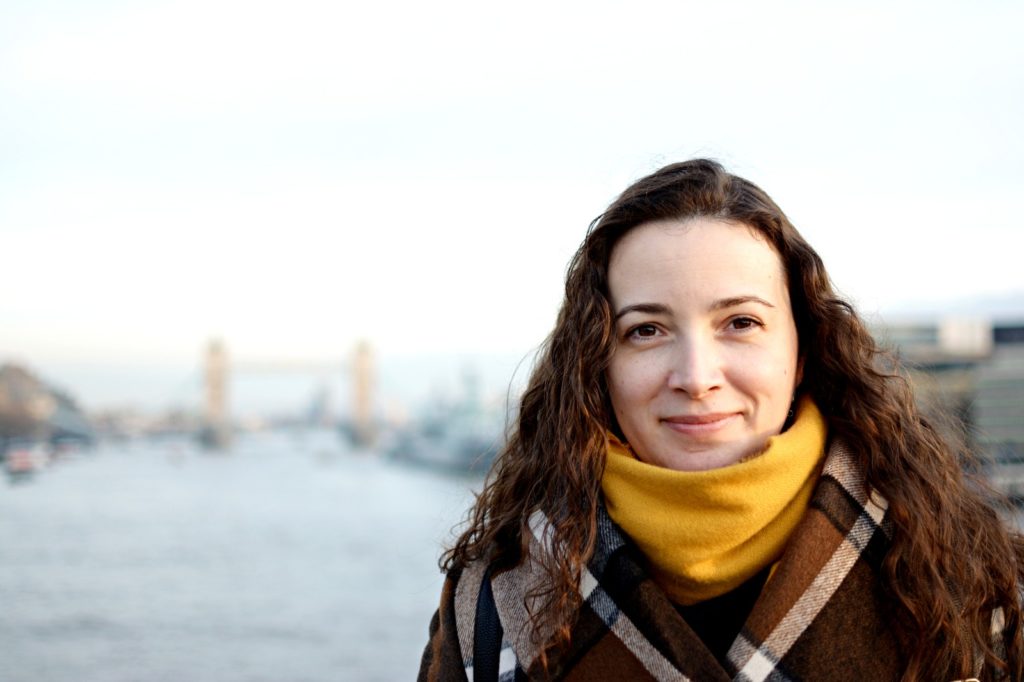